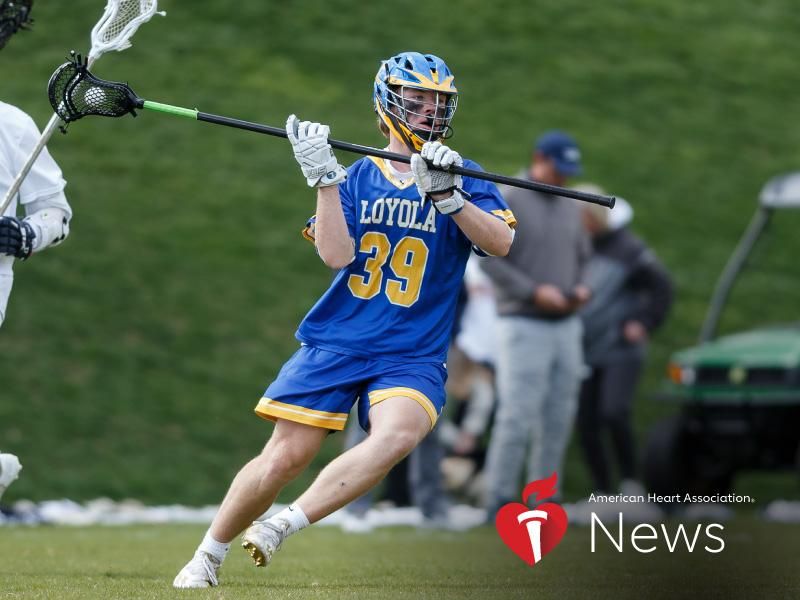 AHA News: A Thump to His Chest During a Game Stopped His Heart. Textbook Response Saved Him.

On April 16, 2021, Peter Laake was a starting freshman defender for his prep school's varsity lacrosse team. He'd had a good year, and now his team was playing a key rival on home turf in Towson, Maryland, a Baltimore suburb.

The first quarter was nearing an end when the ball walloped Peter's chest. Sitting in the stands, his mother heard the ball's impact, then watched her son take a few steps. "I saw his legs kind of flop in the air," said Carron Laake.

Peter turned to see where the ball went. "Then I got dizzy."

Jeremy Parr, the school's head athletic trainer, was among the first to reach Peter. He thought Peter had suffered an abdominal injury or had the wind knocked out of him. Then he saw that Peter's breathing was labored – gasping and gurgling – and he was unresponsive. When Parr and the team doctor couldn't find a pulse, they rolled Peter to his back and removed his protective gear. The team doctor began CPR while Parr sent another trainer to the sidelines to retrieve the AED, or automated external defibrillator.

Dr. Robert Dudas was in the stands to watch his son, a player for the rival school. Dudas is chief of academic pediatrics at Johns Hopkins All Children's Hospital. At the moment of impact, he was glancing at his phone. He looked up in time to see Peter's unsteady steps and his collapse.

Peter's falling face-first without putting his hands out to block the impact told Dudas this was no ordinary lacrosse injury.

Dudas jumped a wall to reach the field. He joined Parr and the team doctor, assuming a position at Peter's torso to search for a pulse in his wrist. He noted that the team doctor's chest compressions were textbook: 2 inches deep, 100 to 120 repetitions a minute, no interruptions. But the welt on Peter's chest told Dudas that time was short.

"This is commotio cordis," he said aloud.

Commotio cordis is Latin for "agitation of the heart." The phenomenon occurs when a projectile strikes the chest and disrupts an otherwise healthy heart's electrical system at a specific moment between heartbeats. This is what may have happened to Damar Hamlin, the Buffalo Bills player who had a cardiac arrest after making a tackle during a recent NFL game.

Cases are exceedingly rare, with fewer than 30 reported in the United States each year. Conditions for it to occur are exacting. "Commotio cordis requires being hit in a very specific spot in a very specific point in the cardiac cycle," Dudas said. It also requires a projectile to be traveling at a specific range of velocity – generally 40 miles per hour.

Reported incidents of commotio cordis have been on the rise in recent decades, primarily in youth sports. The rising frequency of reported cases is believed to owe to expanded understanding and recognition of the condition.

Adolescent athletes are most susceptible, scientists theorize, because the chest walls in youths are more pliable. Ninety-five percent of reported cases occur in boys, a reflection of their representation in sports that see the most cases of commotio cordis, including baseball, hockey and lacrosse.

Survival rates historically have been dismal but have climbed in recent years with greater recognition and early treatment, particularly with the wider availability of portable AEDs.

Research suggests 40% of commotio cordis patients who have resuscitation methods started within three minutes survive versus only 5% of those who receive such methods after three minutes.

On that April day, the crowd around Peter was growing. Carron was now at her son's head. Peter's father was at his feet. Two ICU nurses had left the stands to offer help. A local fire chief with a specialty in emergency response was on hand.

Carron talked to her son. She tried to soothe and comfort him. It was the first anniversary of her father's death. She'd come to the game thinking it would help her get through the day. She stared at her son's motionless head. She willed him to wake up. Then she heard: "We're losing him."

The CPR was still going when the other trainer returned from the sidelines with the AED. Parr placed the AED's electrode pads, then yelled the all-clear after the machine measured Peter's heart rhythm and determined a shock was needed.

The shock produced no immediate response from Peter. Dudas felt his stomach drop. "I didn't think there was any chance of revival."

The team doctor resumed CPR. Parr prepared to administer another shock. Then Dudas felt a pulse. "Hold tight! I think I have something faint!" he called out.

Then, "he just popped right up," his mother recalled.

Peter remembers the moment as a foggy remnant in a broken timeline – hearing voices but not understanding them, struggling to open his eyes. "I tried to sit up and there was this crowd around me."

As an ambulance arrived, people in the stands slowly stood and applauded. More than a few cried.

Peter remained overnight at a local hospital. A battery of tests over the course of two weeks revealed no underlying condition. Peter's sole injuries were a bruise from the impact and soreness from needle pokes. He was back on the lacrosse field in three weeks.

"Initially, I was freaked out about him going back," Carron said. She still struggles seeing Peter on the field. She reminds herself that Peter loves the game (he recently verbally committed to play for the University of Maryland) and that the near-disaster was a freak accident.

Her family is now trained in CPR and always verifies that an AED is readily accessible wherever Peter is playing.

Peter wears protective chest gear aimed at reducing the risk of commotio cordis. There is no definitive evidence yet that protective gear is effective, Dudas said. However, it is becoming more widespread. U.S. Lacrosse now requires that boys' and girls' goalies wear chest protectors that meet a new performance standard. All field players in boys' lacrosse also must wear protection for commotio cordis that meets the standard.

Peter's life was saved by the good fortune of having it happen in front of an all-star cast – athletic trainers, emergency medicine doctors and ICU nurses trained in emergency response. Most situations lack that kind of medical expertise. "The likelihood of having all those resources is so unlikely," Parr said. "So at least make sure you have access to an AED."

The Laake family remains committed to telling Peter's story. "For me," Peter said, "it's not wanting this to happen to someone else."